A year ago I wrote a piece about the development of young players at my club, who at that point had attained positions in the first team and went on to win the Norfolk Junior Cup final. This was a first for the club and to win away from home was a huge achievement.

A year later, last Sunday, our club hosted the Cup final ourselves having again reached the finals. The opposition was the same club as last year, a team from a league higher than us who had finished mid-table.

From our point of view, the squad has developed. Last year, we had a couple of Colts in the team. For example, the lad that ran the kicking tee was short of his 17th birthday by only a few days. This year, he has become a regular fixture in the starting 15. On Sunday, he took to the pitch as the fly-half. The other colts have equally nailed down their positions and we have welcomed some more youngsters into the first team ranks.

The squad now has an average age of 21 and during the season lost only one away game, which led them to win the league and take the club into the highest league we have ever played in.

Sunday came and at half time the match was 10-5 in favour of our guests. It finished 26-10 in our favour. A calm but focused approach and confidence in their play delivered the result. This gave us the league win and cup double – the first the club has ever achieved. To say this was a huge day for the club is probably selling it short!

So, what’s this got to do with mini and youth rugby?

Well, as the team ran out onto the pitch, they ran through a tunnel of our minis and youth players, which included brothers, sons and daughters of the players. Behind them stood their parents, friends and families.

With the exception of a few RAF lads, every one of the boys in the first team has played in our mini and youth teams. There was a crowd of several hundred in attendance for a Junior county cup match. Every single mini and youth player was there.

The approaches, game play and structures used in the senior squads are shared with the youth and mini teams. This has been put in place over the last couple of seasons as all of the coaches from the U7s upwards share ideas and work towards a common goal.

The younger teams approach games in exactly the same way the seniors do.

Match day warm ups and routines are replicated. A number of the seniors, who are young lads with no kids of their own, are turning out on a Sunday morning to coach the minis. One age group has 3 first team players as part of their coaching team. 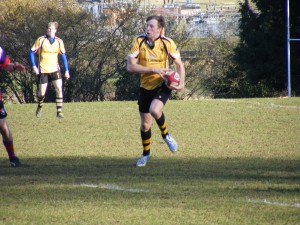 Talking to players after the match about the season, one of the 1st team said he knew there were good things going on when he watched the under 13s execute one of the moves he’d been running that week with the 1st XV. This is coming from a lad who had just won the league and cup double.

The experience underlines the need to get the youngsters to understand that the opportunities are there in the senior teams at their club, that the seniors are part of their club and help develop them as players. They need to understand that by turning up to train they will be given the best training we can provide as a club and we will treat them seriously.

As summer starts, the pre-season fitness sessions will be open to every player, mum, dad, etc. It takes a bit of logistical management, but as evidenced on Sunday, when the club comes together like that, it is very special indeed.